Posted by tknyarlathotep on October 29, 2014
Posted in: Uncategorized. 1 Comment 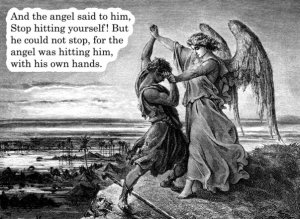 In an example of antiquity combining with the rougher humor of the modern day, this image approximates Biblical language with an image of a man struggling with an angel. The image is in greyscale, a woodcut perhaps, with a very detailed artistic style, realistic and well-managed. In the distance, a tropical island that seems almost primordial sits serenely away from the life or death struggle between the angel and the human. Palm trees emerge from the sea that threatens to overtake the peaceful island, swaying ominously in an unmoving breeze. The stone on which they grapple is ancient, crumbling with the weight of ages and mossy near the edges. Grass grows behind the angel, suggesting that the stone is firmly lodged in the earth of the island itself. The clothes of the two beings stand in stark contrast to one another, the man clad in a rough-hewn black robe, simple and plain, with a pair of leather shoes his feet’s only protection from the elements. His robe lacks sleeves to keep cool in the balmy and warm air that causes him to sweat profusely. Meanwhile, his violent opponent in the angel dons a long and flowing robe, pristine and white, his sleeves missing as well, but smoothly cut, as if they were never meant to be there in the first place. Natural and beautiful, his graceful wings betray an almost sinister air, pointed and almost ragged, as he smites the human with seemingly his own fists. His face is an image of peace despite the cruel struggle he is locked into, serene yet firm. Confident of its own victory, but almost pitying on its victim. The text describes the scene in a comical way, implying that the angel is a cruel older brother who forces his underling to hit himself.